Understanding car crash testing results can help you choose your next auto and could someday help you and your family survive the unimaginable serious car accident.

In the article Crash test 101 How crash worthiness is measured and how crash ratings can help you choose your next car [7] Consumer Reports helps explain the differences between the crash testing of these two main crash testing agencies, NHTSA and Insurance Institute Of Highway Safety, as well as a comparison of what their testing actually does respectively and what that really tells you as a consumer. Consumer Reports is as always a great go to when considering all this information and looking for a concise way to understand all this vehicle testing, physics, information overload.

This Consumer Reports primer on these two car crash testing facilities is very helpful in next exploring the IIHS testing terminology. What these two prominent crash testing agencies fail to test is important to note as well as what and how they do test; Consumer Reports really helps to break down the information in a helpful way. In addition, other consumer car crash testing reviewers can really help digest the gigantic amount of information and help make the important safety ratings more easily understood and identified.

The NHTSA uses its own set of car crash tests and its own rating system.

The purpose of FMVSS 208 standard is to reduce the number of deaths of vehicle occupants, in addition to also reducing the severity / likelihood of injuries in a head on collision car accident. From the car crash testing, the NHTSA will work toward specifying vehicle crash worthiness requirements in terms of forces and accelerations measured on anthropomorphic dummies in test crashes, and by specifying equipment requirements for active and passive restraint systems. [2]

EV - electric vehicles - have to have special crash worthiness testing which examines the fire hazard and other dangers of the lithium ion batteries, after a rear end accident especially. Some lithium ion batteries have been known to self ignite even several weeks after having been in an accident. For this reason, the NHTSA crash testing has helped create guidelines for emergency responders, tow truck drivers and industry, for the proper procedures for electronic vehicles involved in a serious accident, especially in this case a rear impact car accident because in many electronic vehicles the batter is in back of the car. However, side impact accidents have also been known to cause resultant related fire. [4]

Via the U.S. DOT's docket management system. Vehicle crash test reports from 1999 to present are available, along with the details of rollover ratings from 2001 to present. Download from the DOT docket at http://www.regulations.gov.

Try a "Simple Search" and use the following docket numbers:

Of course in discussing head-on accident collisions, consumers are fortunate to have to consider air bags. Air bags can injure occupants but they also help car occupants survive a serious car accident with far fewer and less severe injury. Even some motorcycles offer an airbag protection. [5] 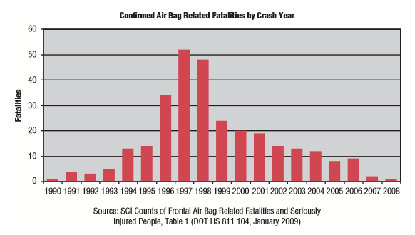 As you can see in the above data graph, the fatalities associated to airbags peaked in the mid 1990's, really a short time after the air bag became common in new cars. By the 2000's the incidence of fatalities had been greatly reduced nearly to being non-existent.

As to the effectiveness of air bags in saving lives, especially from a frontal impact collision, or a head-on accident, the NHTSA report of the data collected through 2008:

Based on their 11 percent effectiveness alone, NHTSA estimates that frontal air bags saved 27,022 occupants from 1987 to July 1, 2008. This estimate includes 22,126 drivers and 4,896 front-right passengers. These are significant life-saving results, especially noteworthy given that the fleet has yet to reach full penetration of driver and passenger frontal air bags. [6]

The NHTSA special report on airbags tracks both injuries from airbags as well as lives saved most likely due to the airbag given the severity of the auto accident impact (as well as known forces studied through their NCAP program). The NHTSA report Counts of Frontal-Air-Bag-Related Fatalities and Seriously Injured Persons , January 1, 2009, tracks the number of crash fatalities that were confirmed to be related to injurious interactions with air bag deployment. [6] According to this same report, since awareness of the potential danger of an airbag became known, great strides have been made and the last 6 years, very few fatalities have actually been attributed to airbags in these corresponding modern vehicles.

NHTSA research and analysis had found that drivers protected by air bags experienced reduced fatality risks of 31 percent in purely frontal crashes (12 o'clock point-of-impact on the vehicle), 19 percent in all frontal crashes (10 o'clock to 2 o'clock), and 11 percent in all crashes. Initially, FMVSS 208, Occupant Crash Protection, as amended on July 17, 1984, required that automatic occupant protection such as air bags or automatic seat belts be phased into passenger cars during the period 1987 to 1990. When NHTSA issued FMVSS 208, it also began a continuing, nationwide effort to increase belt use through encouragement of State seat belt use laws, enforcement, and public education. Use of manual lap-shoulder belts was shown to reduce the risk of fatal injury to front-seat occupants by 45 percent, but in 1983, only 14 percent of drivers buckled up. Initially, automatic belts installed in response to FMVSS 208 helped increase seat belt use. [6]

Seat Belt: Testing and State law enforcement of use

You'll come across seat belts, if you start reading up on a new car. As you can see airbags are surprisingly interesting and have been sometimes dangerous in the past in an accident. Interestingly, even motorcycle designs have included airbags at this point in time. Similarly, seat belt use and design as well as enforced usage, are still a very important topic in assessing car crash worthiness.

Motorcycle airbag systems have been long on the horizon, but difficult to implement fully. The new generation of motorcycle airbags are here, now, and they promise a great safety improvement for motorcycle riders.

According to the Motorcycle Accidents In Depth Study, an impact with an automobile accounts for 60 percent of all motorcycle accidents. The time between the motorcycle hitting the car and the rider hitting the car is just .08 seconds. After the head (which should be protected by a helmet), the most frequently injured body parts are the chest, abdomen and back. D-Air Street provide comprehensive coverage of the chest, upper abdomen, collar bones, neck and back. [8]

Aside from the expensive Dainese D-Air and Alpinestars TechAir systems, Honda now actually has a road bike motorcycle line which comes with their own researched and engineered airbag system. [9]

But designing a motorcycle airbag is more difficult than in car airbags, for many reasons:

Unlike accommodating head-to-airbag contact that occurs with car airbags, motorcycle airbags must contact and interact with a wide variety of helmets. In particular, it is possible for a still-inflating airbag to catch under the chin bar of a particular helmet, or between the helmet and the clavicle region. This may accelerate the helmet mass upward or rearward, whilst the helmet chinstrap remains fastened beneath the head. Exploratory tests with helmeted forward- leaning cadavers by Ramet et al (1994) indicated that the action of the motorcycle airbag against the helmet resulted in neck fractures or dislocations in 4 out of 4 cadavers. [11]

But there may well be more reasons why motorcycle airbags do not work as well as in car airbags do for car occupants.

In addition, in accidents, airbags are aimed at reducing head and other injuries. However, rider injuries, including head injuries, are more frequently caused by rider/ground contact than rider/car contact (Hurt, 1981). Airbag effects on rider/ground contact are complex and difficult to generalize. Iijima (1998) reported that a prototype airbag increased neck injuries at head/ground contact, due to the somersaulting motion of the rider. [11]

Motorcycle airbags have been coming a long way. There's many reasons why a motorcycle rider may want to opt for just a good kevlar body armor suit and great motorcycle helment, and then wait for the future generations of onboard motorcycle airbag like Honda's. [9] However, we will be watching the latest developments in motorcycle airbags and hoping for the best.

5. Insurance Institute for Highway Safety - A & AS Airbags

7. Consumer Reports In Crash test 101 How crash worthiness is measured and how crash ratings can help you choose your next car Published: September 2012