At the Kransky trial the Depuy lawyers frequently referred to the lawyers who were representing Mr. Kransky as "those Kransky lawyers," as if this was a bad thing to be.  They argued that it was wrong for Mr. Kransky's lawyers to help find a surgeon for Bill who would take out his defective ASR hip device.  They suggested that his ASR revision surgery was lawyer driven but the medical testimony and the photographs presented at trial clearly showed that Bill Kransky had his ASR removed because of the metal debris in his hip joint capsule and the resultant metalosis. The metal fretting from the defective ASR device had killed his hip tissue and muscles. If the Depuy ASR had not been removed, Bill Kransky might not be alive today.

Dean Goetz (Goetz Law Offices) and John Gomez (Gomez Law Firm) are the lawyers who have represented Loren Bill Kransky from the beginning of his Depuy ASR nightmare.  Dean Goetz and John Gomez are proud to be the Kransky Lawyers. 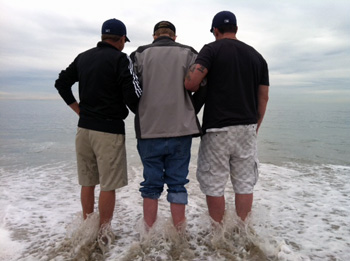 Bill Kransky stepping into the Pacific Ocean with his lawyers, Dean Goetz and John Gomez.

How the Kranksy battle began.

At this time the Kransky family informed Dean Goetz that Bill had been told that his cancer was back and that his recent PED scan lit up like a Christmas tree.  His oncologist and other doctors thought Bill had numerous cancerous lymph nodes and he would die within two to three months.

Attorney Goetz knew that the only way to give Bill a chance to have his day in court was to ask the Court to give Mr. Kransky an advanced trial date. Therefore, Dean Goetz immediately prepared and filed a Preference Motion asking Judge Richard Kramer of the San Francisco County California Superior Court to place Bill's case on the trial calendar within 120 days as called for under California Law, if the plaintiff has less than six months to live.  One of Bill's doctors signed a declaration stating that in his opinion Bill would die within six months. All of Bill's doctors thought he would die within a few months.  The Preference Motion was granted and the case was set for trial in Los Angeles Superior Court on January 22, 2013.

John Gomez and Dean Goetz flew to Montana and spent several days with the Kransky family in Miles City, Montana.  They spent alot of time with Bill and Bill's wife, Sheryl, and their daughters, Jenny and Jessica, and two of their grandchildren.  Bill was very sick and his close knit family was very sad that Dad was dying but Bill desperately wanted to have his day in Court.  He had been wronged by Depuy and Johnson and Johnson and he wanted others to know what they had done to him by selling the defective Depuy ASR XL hip replacement device.

One day while they were in Miles City in Bill's living room, Dean Goetz asked Bill Kransky, if he was going to stay alive for his trial and he responded that he would "try."  Dean said: "Bill that is not good enough, you are a strong Montana man, and you have to promise me right now that you will stay alive for your trial."  Bill looked at Dean and thought for a moment and said:  "Ok I promise that I will stay alive for my trial."  Bill Kransky had a strong will to live and a good family and he kept his promise.

After taking 20 depositions in Montana, North Dakota, Wyoming, Idaho, New York, and Boston over a period of 4 months and presenting the Kransky case to a jury for 5 weeks in downtown Los Angeles the Kransky family legal battle with Depuy resulted in a verdict in favor of Bill Kransky.

On March 8, 2013 Loren Bill Kransky obtained a jury verdict in Los Angeles Superior Court for $8.3 million because Dean Goetz and John Gomez got him an expedited trial date.  Bill Kransky got to tell the jury and the world his story because he had a number of excellent lawyers and two good men on his side.

Somehow Bill Kransky made it through the trial and he is not only still alive but he seems to be getting better.  It appears that his doctors were wrong and the inflamed lymph nodes that were thought to be cancerous may have been inflamed for other reasons.  Maybe, it was the cobalt and chromium from the Depuy ASR XL that caused the inflammation.

Dean Goetz and John Gomez will continue to fight hard for all their other Depuy ASR clients and seek justice for each and every one of them. The Depuy ASR case is not a Class Action lawsuit. Each person who has been injured by the defective Depuy ASR is entitled to his or her day in Court in front of a jury just like Bill Kransky.

March 8, 2013 will be remembered as a good day for justice in America and a good day for the many victims of the defective Depuy ASR XL hip replacement device.

Dean A. Goetz and the Gomez Law Firm were the attorneys for Mr. Loren Kranksy, the Plaintiff in the first Depuy trial in the USA. 3/6/13 at 9:38 a.m. PST A jury found Depuy liable to Mr. Loren Bill Kransky today in a Los Angeles Superior Court. FIRST verdict in the USA against Depuy for $8,328,000. We Are The Kransky Lawyers. Kranksy vs. Depuy and Johnson and Johnson, Los Angeles County Superior Court Case #BC456086.

It took three and one half more years for this to finally end for Mr. Kransky's family, on 7/21/16 Court of Appeals Upholds Kransky v. Depuy.

November 2017: Dean Goetz with Mr. Kransky's full legal team Nominated (PDF press release) for Consumer Attorneys of California Attorney of the Year 2017  for our work in Kransky vs. Depuy, and Mr. Kransky's long road to justice.

Articles published during the first Depuy trial on emerging information:

Articles about Depuy recall leading up to trial: